We hope you all have a safe and happy Easter. Enjoy your families, friends and the sacrifice that Christ has made for all of us. Most of all, may His resurrection inspire you to do great things, be a better person each day and feel His love.

We joined the Dr. Seuss & Friends club when our first was a baby and by the time he was learning to read we had a large “library” collection of Dr. Seuss books.  I remember The Cat in the Hat was the book they loved the most when learning to read.  They just couldn’t get enough of it.

Join Dr. Seuss & His Friends today!
– Receive 3 new books each month
– Create lasting memories with the same classic stories you loved as a child
-Wacky and wonderful characters will engage & entertain your child and you
-Control your membership online
-Risk free. Cancel anytime…
-No Purchase commitment!
-High-Quality, hard cover editions
-Convenience of home delivery for less than $6 per book!

Change Your Printer Settings to Save Ink

Sure you can save money when you print by shopping around for printer ink deals (check out Comboink, they run great specials), but you can reduce your use as well with a few little changes to your printer.

Change the settings on your printer

First thing you need to do is get to your control panel on your computer and find your printer. It’s a little bit different for different computers and operating systems. On Mac’s it’s under “System Preferences” then “Print & Scan”. On older versions of Windows you go to the start button, then select Settings, then Control Panel to find the printers. On the newest Windows 8 you need to start at the “Libraries” button that looks like file folders and select “Desktop” then “Control Panel”.

After all of the above, you should then be able to locate your printer. 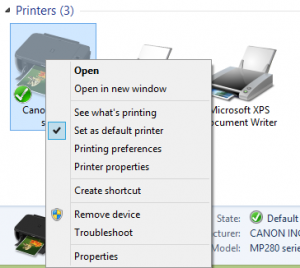 Once you open that, you will see your options for your printer. In almost all cases the options you need are now on the tab that opesn up.

Look for “Greyscale” or “Black & White Only” and make sure it is selected to make your printer default to only using black ink (which is cheaper) when printing. Don’t worry, most stores allow coupons in black & white knowing how much more expensive it is for color ink. Just make sure you know your store’s policy for sure.

Also look for “Quick Print” or “Draft” printing options. This will make your printer use less ink, print faster and also save you money. As long as you have ink in your cartridge, it still prints dark enough that registers can your coupons.

Select “OK” or “Save” and then print!

Print the $1.00 off ONE Bolthouse Farms Kids Product coupon HERE. If you love your Bolthouse Farms Drinks you can now share that love with the kids and have them eat healthy snacks too!

I’m willing to bet there’s a lot to Walmart that you did not know about. As I was doing some research I too was also a bit surprised at some of the facts about Walmart. I hope you’ll enjoy this one as much as I enjoyed writing it! (Thanks to People of Walmart for the photo. No that’s not me!)

Walmart was started by a man named Sam Walton who purchased his first general store in Bentonville, Arkansas. He was inspired by the success of his competitors and shortly opened up the first Walmart store on July 2, 1962. In 5 years short years Walton had opened up 24 stores across the state and profited $12.6 million in sales! Now the retailers exceeds $316 billion in sales every year. That’s more sales than Kroger, Target, Costco and Walgreens COMBINED!

Walmart often gets the brunt of the beating when it comes to the work place. It’s often said that the employees aren’t compensated fairly and not enough benefits are being offered. The company now employees over 2.2 million associates worldwide and serves over 200 million customers every week in over 11,000 stores in 27 counties! As the largest employer of the United States it’s no surprise there’s often law suits and strikes!

What many folks don’t know is that Walmart is one of the largest retailers that comes to the aid of our country when we are in need. Did you know that Walmart was along side Lowe’s and Home Depot during Hurricane Katrina? In fact, these major retailer provided $20 million in cash, supplies and meals and responded to the aid faster than the government. It’s known now that Walmart donates over $1 billion dollars on a annual basis. Personally I love to give back to companies who give back!

Walmart is also committed to our environment. The retailer committed to spend $600 million per year to increase the fuel efficiency of their fleet of trucks. They are also reducing energy in their stores and cutting waste, so much so that they have a goal of zero waste! In fact Walmart did a study and it resulted that the big box stores could save $2.4 million in shipping costs which also results in saving 3,800 trees….how cool is that?

Are you a organic family? You may want to consider purchasing your organic milk simply because Walmart is the largest seller of organic milk which means lower prices for YOU!

Here’s a few other facts about Walmart that I thought was interesting:

Did these Facts About Walmart blow your mind? I’m all about supporting the retailer because as you can see the good far out weigh the bad.

What’s one fact that you found interesting?

Can you imagine that some places in the country don’t have Chick-fil-a?  I know it hurts my feelings too but I am just glad I live in a city that has them! If you are a coffee drinker and lucky enough to have Chick Fil A in your area February is going to be your favorite month!  For the entire month of February, Chick-fil-A restaurants nationwide will give customers a free cup of its new specialty-grade THRIVE Farmers hot or iced coffee all day long. What a great way to start the day!